How does yield work in application.html.erb

You'll encounter this in new Rails apps inside your application.html.erb:

But how does yield work inside of the layout template? Where does it get executed and how does it know to yield the right view in between the layout?

First of all, you'd need to understand Ruby's yield syntax itself. There's a lot of good material about it in the Internet, but in short:

You define a method that takes a block:

And when executing that method, you give it a block as you do with other common methods like .each { puts "block inside of curly braces" } or .map do "also a block" end.

So in our case we do: 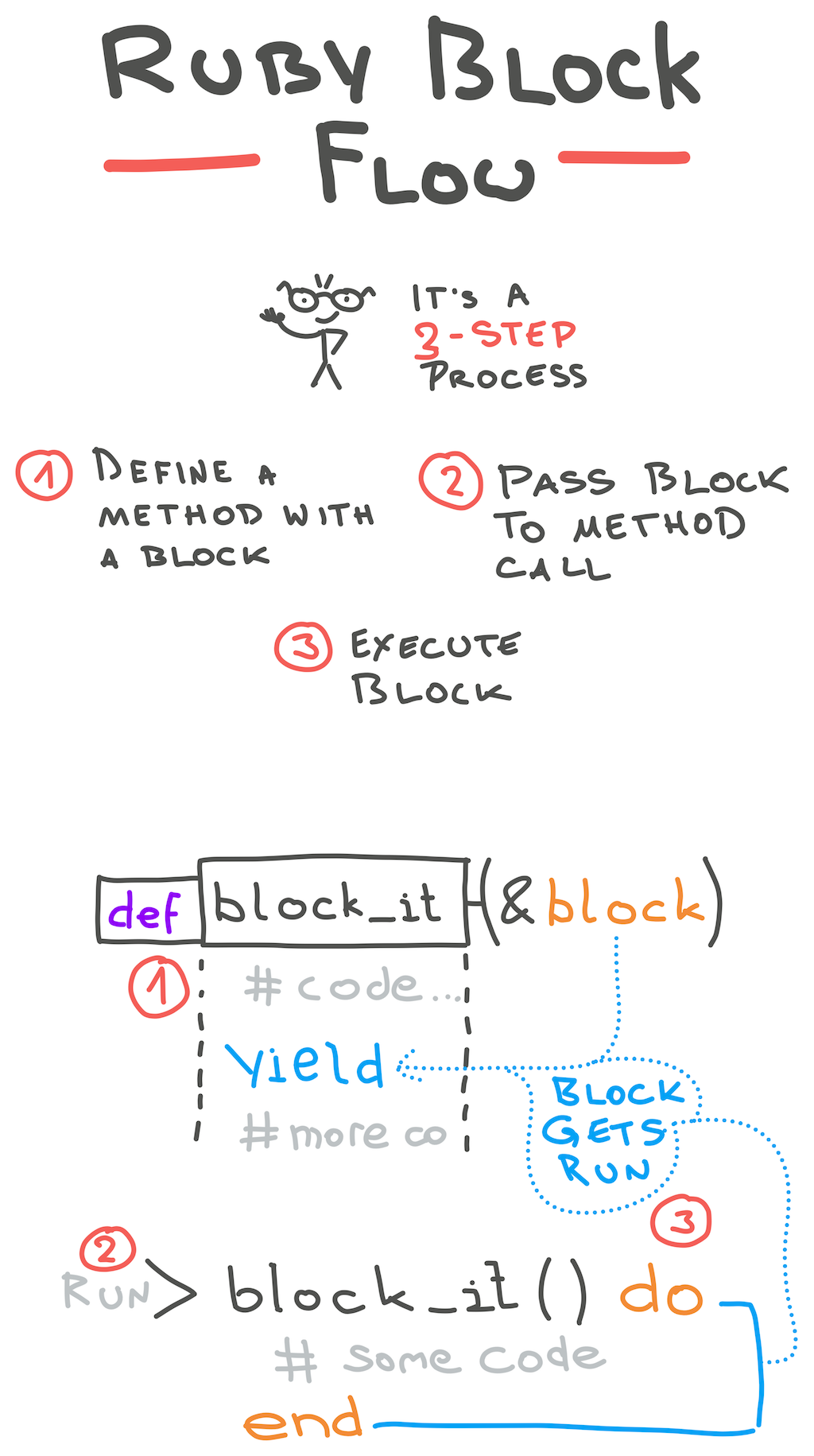 Being equipped with that knowledge, it might mean that somehow application.html.erb gets called with a block that contains the to be displayed view contents which then get yielded between the layout template's <main> tags.

So let's go a step back to the beginning and see how this actually plays out in Rails app and where things are happening.

Now render is quite a beast. I've dug the relevant stuff in the Ruby Guides Layouts and Rendering Section and had a few pointers, so I tried looking into where the flow of render leads in the AbstractController::Rendering module. That's a module included in every controller that inherits from ActionController::Base. So basically most controllers that you'll see in the wild.

The Ruby Guides also mention that the logic for rendering stuff is in ActionView::Template::Handlers.

There's tooooons of stuff happening with a lot of moving parts. So let's try to simplify this a bit.

That's it, all your template rendering is based on this kind of code 👆 Somewhere deep down in the render method hierarchy, ERB takes some input from you (your ".html.erb" files) and turns it into a String which is sent back to the user as a document response via HTTP.

But Rails is cooler than ERB, they don't use ERB directly anymore but Erubi, a different gem that is said to be faster and more robust. Basically, Erubi is a slightly different and optimized implementation of 'erb'.

The above example in Erubi is a bit different, a bit more eval:

Let's tie all of this together now. We said there is this process:

Now we know that render brings things together. It takes the view name, renders the layout and passes the view as a block to the layout. Let's look at an simplified code example to illustrate it.

In some of our controllers, something like this happens:

This is how render could look like in its simplest form:

It runs a render_with_layout method that takes a block where render_template generates the template HTML string for the requested :index view.

render_with_layout takes a default layout in this case that could come from some application.html.erb but here we just store it in local variable for simplicity.

So, you can imagine this:

And in the end, the default_layout is rendered at the end of the render_with_template:

Check it out in the repo if you'd like to play around with it yourself: here

So hopefully this article helps to dullify some magic and to get the gist of the initial question about how yield works in a Rails' application.html.erb. 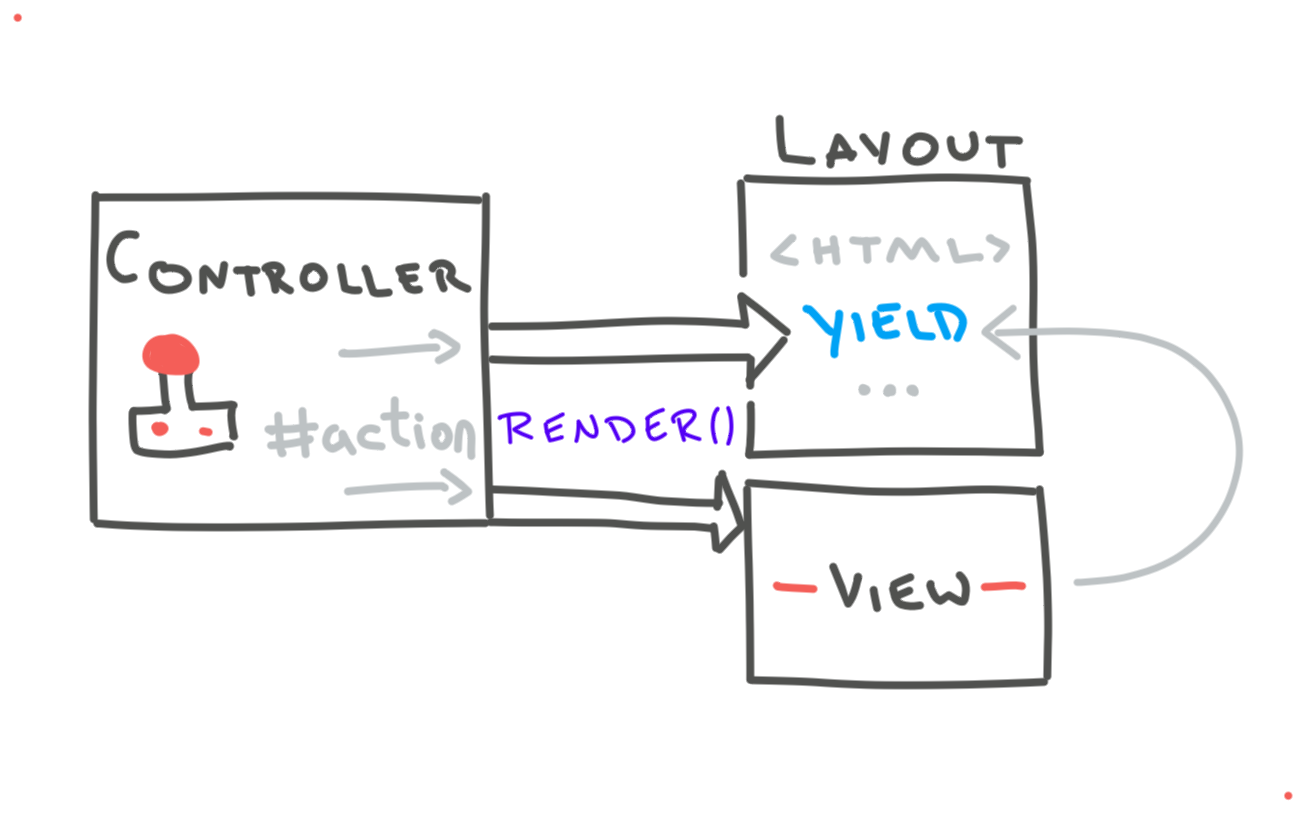 If you've been to any of my workshops or talks, you'll now that I'm a big fan of learning techniques: Recall, Spaced Repetition, Deliberate Practice, and Mnemonics.

Here are some exercises to pump this article into your brain if you feel like it:

Write your own render method where render_with_layout takes a :custom_layout parameter. You might notice that having the default_layout inside of an application.html.erb is tougher to implement. You can make use of methods though, if you'd like to keep things simple.

Now it gets a bit esoteric, but after completing this article, close your eyes and do a mental exercise. Imagine a request calling a show action on your favorite resource. Go the way down from routes over the controller up to the point where the whole yielding stuff happens. Do you see the flow?

Add a reminder to repeat the above recall exercise again in 3 days.

If you'd like to dig even deeper yourself, use some resources and examples that I used for this post:

erubi examples with yield and blocks:

Comments or questions? Just tweet it out to me!

Why do we call it Ruby and Rails Magic?

Rich Steinmetz
There is good and bad magic, enchanting and destructive. But do we need the "magic" term at all? Why do we use it and what mindset does it create?
7 min read Jun 1, 2022
Ruby public

Rich Steinmetz
Open-source is the greatest opportunity to gather real-world experience while you are still on your journey of getting into the industry.
5 min read Nov 26, 2021
Coding Challenges public

Rich Steinmetz
Most coding challenges exercise more your coding/syntax and problem-solving skills and less your analytical and anticipation skills, not to mention your ability to do Test-Driven Development as a discipline. Let's see how to change that!
3 min read Nov 7, 2021
Subscribe
Join the newsletter to get the latest updates.
Great! Next, complete checkout for full access to Rich Stone Input Output
Welcome back! You've successfully signed in
You've successfully subscribed to Rich Stone Input Output
Success! Your account is fully activated, you now have access to all content
Success! Your billing info has been updated
Your billing was not updated